You're here again. Thanks for coming back.

We are flawed. We make mistakes. We drink, smoke, or eat too much. We say or do things that we regret later. No one is exempt from this. So, it doesn't matter if I confess to you that I have flaws because you already know. And, most likely, you have seen them in the photos and the music video. I'm sorry to spoil the illusion, but perpetuating an illusion is like lying, and I don't want to lie to you.

The music video for “Starfleet Boys” was shot in November of 2017. Two friends of mine came down from the UK to help me out. Seriously, I don't have a lot of friends here in Belgium. Many of them have moved away. Some friends just became busy, then became strangers. And, with some, I have had a falling out. So, I begged two friends of mine to come here and shoot an incredibly low-budget video and they were cool enough to comply.

I prepped a bunch of things for the video. I constructed a piñata in the shape of the Enterprise NCC-1701-D because it's my favorite one (dat saucer!). That build took me several days and involved a good deal of repurposed cardboard boxes from the grocery store. I modded a cheap Star Trek 2009 movie pistol so that it looked less pathetic. I baked and decorated a Deanna Troi cellular peptide cake with, of course, mint frosting. I even got my three-legged cat to tolerate wearing a Captain Kirk uniform. We danced and acted badly on purpose. It was all spectacularly nerdy and such great fun!

This is where shit gets real.

I've battled my weight as long as I can remember, and I have always been self-conscious about it. In an attempt to take control of my weight issues, I sought the help of a nutritionist several years ago. I can't remember the diet exactly, but it involved wholegrain jam sandwiches for breakfast and lunch, sugar free/fat free yogurt, margarine instead of butter, anything containing the words “light” or “lite”, and a dinner with a tiny bit of protein and some vegetables. She showed me her collection of little plastic containers belonging to the kinds of products of which she approved. These were kept in a glass cabinet and referred to in an almost reverent manner.

So, I followed the diet. For the duration of it, I was starving and miserable, but totally committed. I was active. I did it for six months and saw very little weight shift. If the nutritionist told me it would work, then why wasn't it working? On our next visit, the nutritionist didn't mince words and was clearly disappointed in my 1 kg weight loss. She reiterated the whole “jam sandwich and margarine” diet just in case I hadn't gotten it the first time. Unsure of the efficacy of her diet, I brought up articles I had read about nutrition, but she told me that they were wrong and that I should just listen to her advice. I left her office feeling humiliated, then canceled our next appointment and never saw her again.

Fast forward to November 1st, 2017. After seeing some Halloween photos of myself dressed as Wednesday Addams, plus seeing myself in a full-length mirror at the laundromat, I was devastated. I didn't recognize myself anymore.

The pictures, the mirror images, didn't match the mental image I had of myself. I looked tired, fat, bloated, and uncomfortable in the photos, but, inside, I felt I was still an awesome lady. My outside didn't match my inside. I guess I have always been surprised by pictures, thinking “OMG, is that how I actually look?” Then I would blame my horror on bad lighting or a bad camera angle, or a wide-angle lens issue. I've never really liked seeing photos of myself (I don't think I'm very photogenic), but this was different. This was deeper, more shocking. I couldn't look this way on camera and feel comfortable. I started thinking about the upcoming video shoot and the following photo shoots, and I could feel my fear and insecurity rising.

So, three weeks before the video shoot, I began following the keto diet. I had read good things about it, mostly anecdotal, and had seen the mind-blowing before and after photos. People were primarily eating meat, fat, and vegetables and doing really, really well. If it had worked for so many people, maybe it would work for me. I mean, come on. It's not like the “jam sandwich and margarine” diet had done any good. I had put that 1 kg back on, and then some. I figured that I'd give keto a shot for the three weeks until the video shoot. If I felt okay, I'd continue. If not, I'd stop.

I gave up sugar and starchy carbs. At that point, I was a bag-of-candy/several-cookies-a-day/emotional-eating kind of girl, so that was difficult. I used to eat tons of fruit because I was told it was healthy. Crusty baguettes and cereal were my favorite kinds of carbs. I had eaten these foods all my life and never thought there was an issue. Until it became an issue. I had to be honest with myself. I knew that I was unhealthy and overweight. I barely had energy and was taking regular naps in the afternoon. I took a long look at my relatives and saw obesity, diabetes, cancer, and high-blood pressure. It would only be a matter of time before genetic pre-dispositions caught up with me.

I made a lifestyle change. It was weird at first, but those first three weeks on keto had the most profound effect. I felt less addicted to sugar. I was losing weight without trying. I had more energy. I walked more. I didn't get hangry because of massive drops in blood sugar. And by the time the music video shoot rolled around, I had already lost a reasonable amount of weight and felt pretty confident.

My pal, Chris, shot the video and ended up editing it, too (thanks!). Everyone helped out, though. Lots of effort, lots of time, and lots of resources were spent on making this. Even though, in music video terms, this was a drop in the bucket compared to what other musicians spend. Probably.

After a few months, with several more kilos lost, I watched the first edit of the video...and I felt weird. I looked at the girl in the video and was still bothered by the way she looked. Again, my outside didn't match my inside. I felt fantastic while making the video, and the mental image of myself during the shoot was that of a crazy, sassy little badass. I had a freaking blast! But then, while watching the final cut months later, all I could think about was how ugly I looked and how uncomfortable it made me feel. And then I began to think about not releasing this video at all because I felt so embarrassed. All of this time and work and effort would have been for nothing. Just a memory of something wacky we did in November.

No one would have to know how fat I used to be. It could literally be my big, fat secret.

I thought about this for a good month. Should I release the music video or should I hide it and never speak of it again? But, in the end, I decided that I had to release it. It would be a damn shame if I didn't.

You see, human, I want you to know what kind of person I am. That includes the fatter (but in no way less awesome or valid) version of myself, too. We all have different versions of ourselves scattered through our timelines. These versions, these experiences help shape us into the complex human beings we are now. For example, my experiences as the smart, chubby Asian girl with permed hair, coke-bottle glasses, and a mouth full of metal really made me self-conscious, but also more appreciative of how I look presently. I don't feel like I need to be supermodel-perfect, just the best version of myself, the best that I can be at this moment in time.

The album booklet photos were taken over the course of a few months, but most of them are recent. And you'll be able to see the differences between the me in the video and the me in the photos. I weighed more back then, and now I weigh less. That's just my truth.

I will always try to put my best foot forward, but I can't change my past or hide my flaws. And I won't lie to you and act as if I have always looked the way I do now. You deserve better. You deserve honesty. If you run away screaming, that's okay. I'll understand. I would rather be real with you than pretend to be an idealized version of myself who has never had a bad hair or body day in her life. That perfect girl, that piece of fiction, doesn't exist. Not here, not in this corner of the internet, not anywhere.

She is an illusion.

If you prefer the fantasy, then I'm sure there are lots of artists willing to perpetuate that. There are lots of people, in general, who will have you believe that they are practically perfect in every way, especially on Instagram. They appear confident, poised, and never awkward. I am not and will never be one of those people. I am a human being, just like you, riddled with the flaws that make me who I am, and made richer and wiser because of them.

Understand that I started losing weight for myself and myself alone. I thought I was cool when I was heavier and I still think I'm cool a few kilos lighter, especially because I have taken matters into my own hands and tried to deal with my food issues. Changing was a personal choice, and it has helped me tremendously so far, but I would never impose it or force it on anyone else. I am not an authority on health. I'm just a person who wants to be healthier both physically and mentally.

I want to live long and prosper. 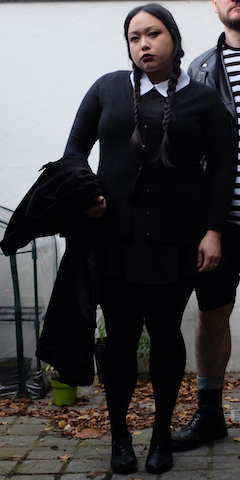