HOW TO BUILD A STARSHIP

You don't look well.  Are you angry? Upset?  Do you need to beat something furiously with a blunt object so that you can purge pent up emotions and feel better?

I can help you build a piñata.

Was this not what you were expecting?  Well, aside from forming your own Fight Club, this is a good way to let go of stress while simultaneously being showered by candy or confetti or whatever you feel like sticking inside a piñata.  You can stuff it full of dollar bills, beat it with a stick and make it rain. Then you can have your own American Psycho-esque fantasy sequence minus the blood and hookers.

For the “Starfleet Boys” video, I had to do a good deal of DIY.  One of those DIY items was an Enterprise-shaped piñata. They don't sell these kinds of things here in Belgium.  I'm sorry I didn't have the foresight to take more photos, but I'm hoping you'll get the gist of it.
When I was a young girl, I used to make piñatas using a balloon, glue, newspaper strips, and time.  The shape wasn't very impressive and looked less like a piñata and more like an X-Files Eugene Toombs hibernation cocoon.  (Yeah, I still filled it with candy, then beat it.) This was my first time making a piñata using a cardboard structure. 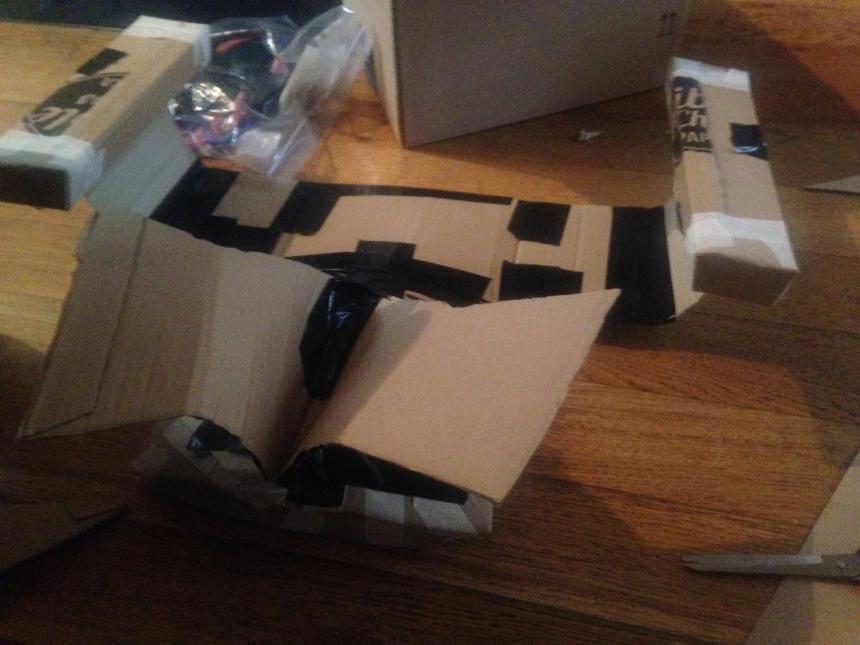 I started by creating the most complex shape, which is the body of the ship.  If you're using cardboard boxes, you'll need to break them down into flat pieces.  I used duct tape in bent areas to straighten them out and create a larger flat surface area from which to cut.  I made rough shapes, covered open areas with brown craft paper, then used more duct tape to connect it all together and support it.

This part of the ship is two long bar shapes, connected by a wide strip of cardboard.  I folded cardboard, then used brown craft paper to cover the open ends. To get curved shapes, I taped some flexible wire to the cardboard and bent it into place.  I then cut 2 parallelogram shapes for the connecting area and tape them to the wide strip. I left the top connecting flaps undone as I make the saucer. 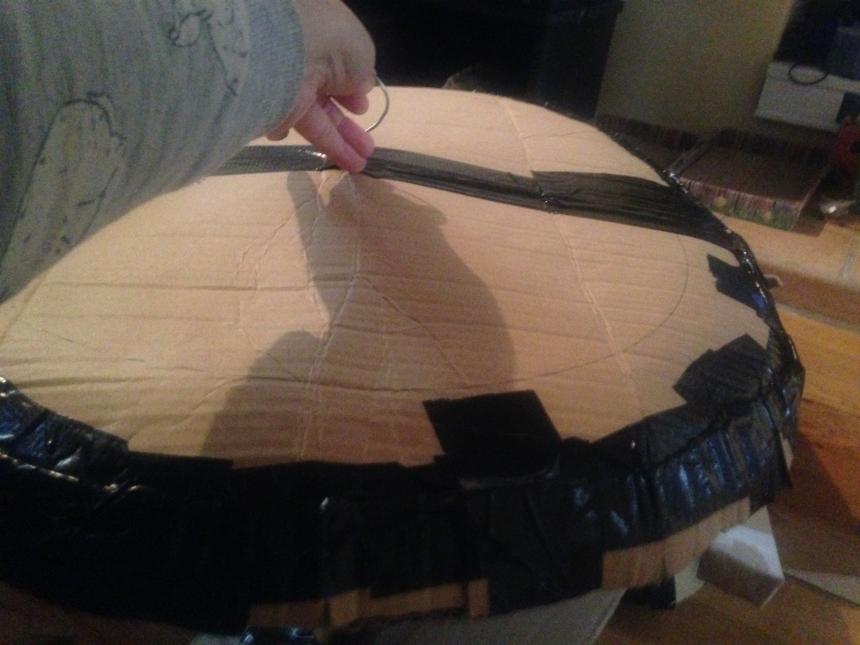 The saucer section was, basically, two large cardboard circles.  I drew a smaller circle inside the cardboard circle in order to create the sides of the saucer to made it more 3 dimensional.  Then I taped it up and left a small opening in the front so that I could fill it with candy. I also poked a hole in the middle of the top of the saucer and ran a wire loop through it for hanging. 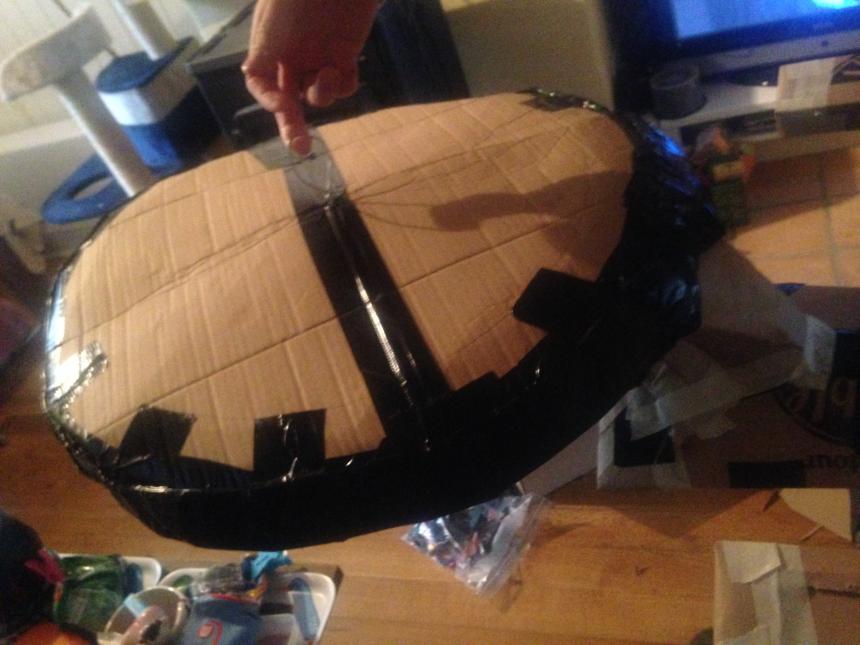 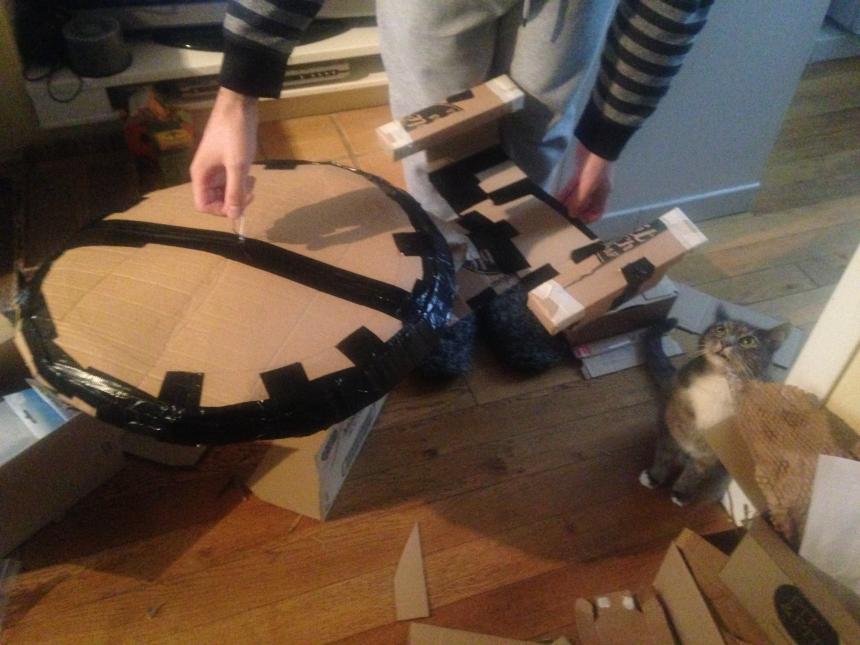 I connected the body and saucer together (more duct tape and masking tape).  The toughest part was a small, triangular section on the neck area that slopes downward.  I had to create dimension between the two parallelogram shapes by spreading the sides apart and using craft paper and masking tape to cover up the gap.  Yes, that's Chubs, the three-legged cat in that photo. 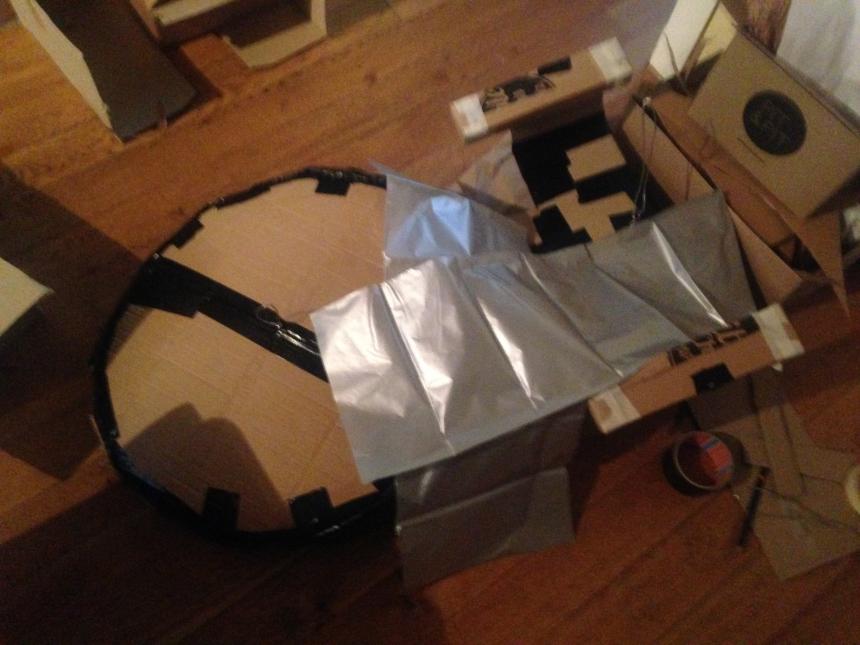 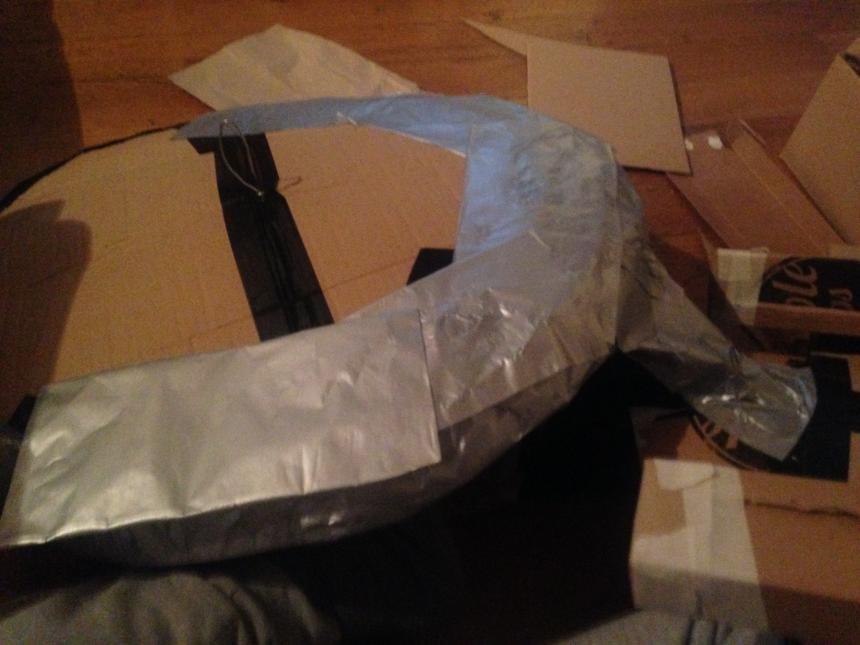 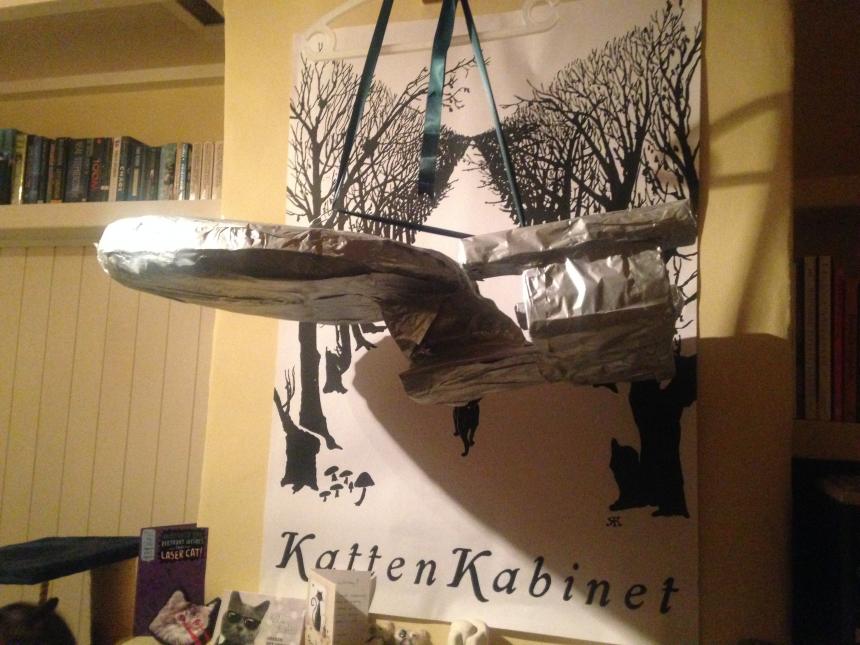 The next day, I decided to cover the entire thing in silver tissue paper.  You don't have to be really careful. As long as you glue it down and press a bit, it will stay on fairly well and fairly flat.  I also added a second hanging wire on rear of the ship since the saucer section was so heavy. 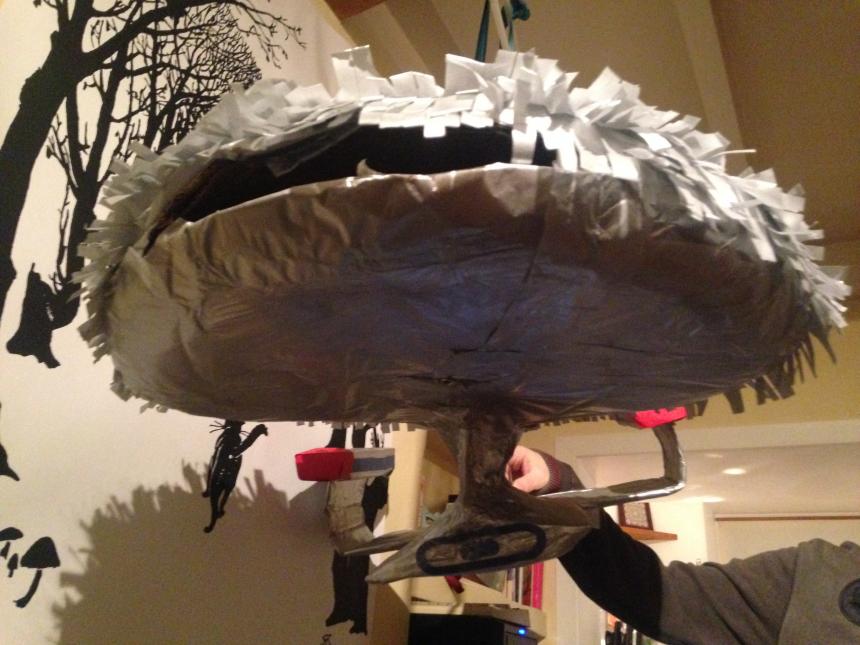 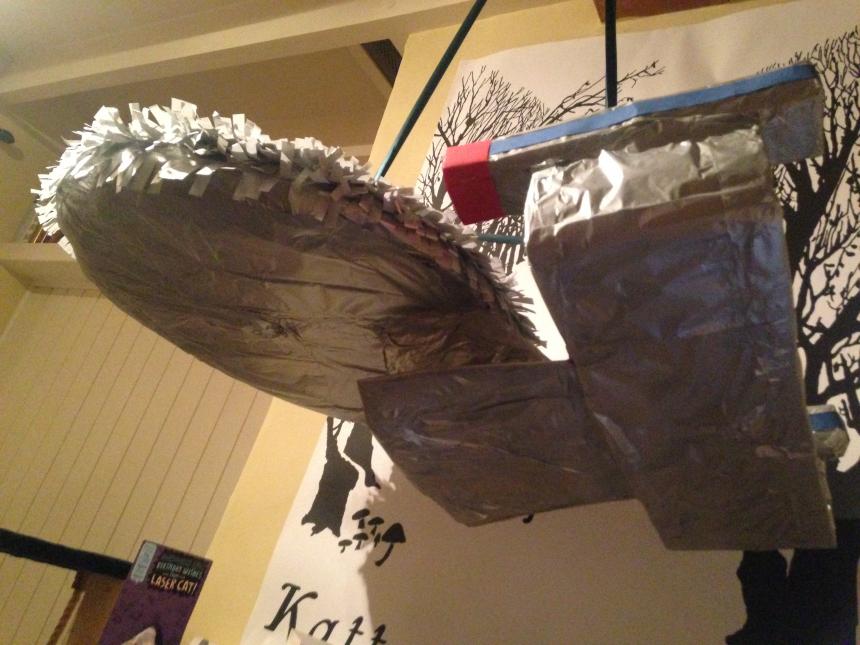 To make the saucer section look more like a piñata, I added ruffly bits.  This can be achieved by cutting long strips of the same tissue paper, making small snips halfway through the width, and glueing the strip along the edge of the saucer.  I made a stupid amount of ruffles. I also added some red and blue construction paper accents around the engine and nacelles. 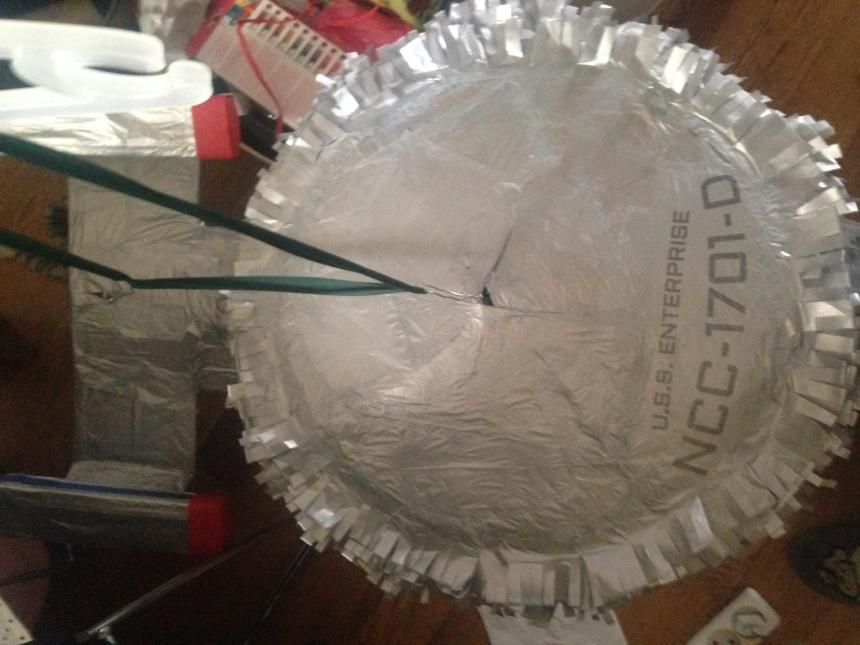 I'm a sucker for details, so I found a similar font used on the ship, made a graphic that followed the curve of the saucer, taped some silver tissue paper onto regular printer paper, and printed it.  It took freaking forever and was a pain in the ass. Also, the ink smudges easily, so don't attempt to glue it until it has dried for a while after coming out of the printer. I cut out the graphic and glued it down.

And, because all good things must come to an end (some of you will get this reference), I beat the crap out of it using my little-Asian-girl rage as fuel.  And it didn't break right away. It was too solid and too strong! So, I had to cut some slits underneath the saucer section so that it was unable to maintain hull integrity.  After the Enterprise's shields were down and the hull had been breached, I boldly went nuts on that bitch and ripped that saucer section open like an animal. Since it had been filled with confetti, tribbles, and candy (I like to call these the Enter-PRIZES *cough* dad joke *cough*), all that stuff came raining down, tumbling onto my face, the camera, and the floor.  You can watch me do this in the video. You can tell I have a lot of issues.

And so do you, human.

So, seek therapy.  Gets some meds if you need them.  Then make a piñata.

Make it, break it, and just let it all go.  You'll feel better, I promise.